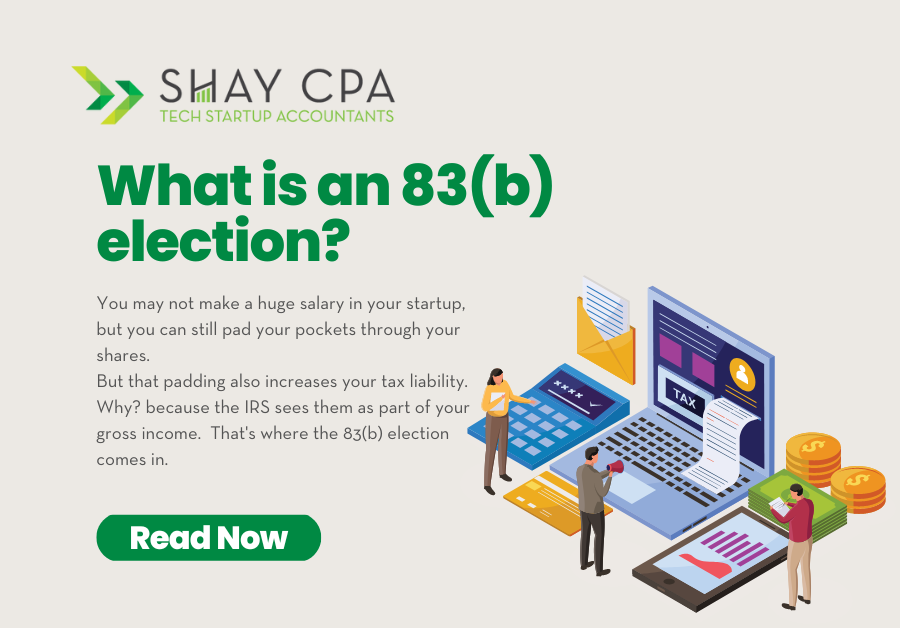 As a founder, you get one of the biggest perks through equity in your company. In your early days, you probably aren’t raking in a huge salary or taking sizable owner draws. But you can still be padding your pockets through your shares in your company.

While these shares definitely come with perks — from a clearly defined ownership stake to the potential to make money down the road — they also increase your tax liability. The IRS sees them as part of your gross income.

Fortunately, there are provisions in the tax code that can limit how much you have to pay in taxes on those shares. Specifically, many founders opt for an 83(b) election.

Essentially, the IRS sees vested shares as income. It makes sense since they’re essentially money in your pocket. And like any other income, shares get taxed.

If you don’t take any action, you’ll pay taxes on those shares as they vest. Again, that makes sense. They become taxable as you actually get the opportunity to use them.

But there’s another option here, one that can potentially reduce your tax liability. The Internal Revenue Code (IRC) contains a provision that allows you to elect to include granted but unvested shares in your gross income at the time of granting. This option is called an 83(b) election because it comes from Section 83(b) of the IRC.

If you take this election, you’ll pay taxes on the granted shares in the tax year in which they were issued rather than as they vest. This option is available to all company employees who are granted shares, including founders.

If you take it, you pay the fair market value of the granted, unvested shares that year. Let’s clarify: for shares to be eligible for 83(b) election, they need to be unvested. If any shares are granted and vested at the same time, their fair market value automatically gets added to your gross income in that year.

It’s also important to know that your 83(b) election doesn’t eliminate all tax liability associated with the shares. If you sell them in the future for a profit, you’ll still need to pay the capital gains tax.

All of this said, you might be wondering why anyone would pay more taxes than are absolutely necessary for any given year. Let’s take a look.

Why people choose an 83(b) election

Let’s say that you have shares representing a 20% ownership stake in your company that will vest over five years. At the time of granting, your company is valued at $100,000. But three years later, you’re valued at $1 million. While that ownership equity started as $20,000, it represents $200,000 three years later. So as you pay taxes on the shares as they vest, the amount you’ll need to pay grows significantly year over year.

At least, that’s the case if you don’t take an 83(b) election. If you do, you can pay taxes on the fair market value of that $20,000 in that first year that the shares are granted. This saves you from having to pay more and more in taxes as your company grows in value.

In short, an 83(b) election makes sense if you expect the valuation of your company to climb up significantly in the years during which those shares would vest. It can deliver dramatic tax savings over the years, especially if your startup takes off.

Beyond all of this, paying taxes on your shares starts the one-year capital gains tax holding clock. Once they vest, if it’s been a year and you sell them, you’ll only be subject to the capital gains tax. While that will still cost you a fair chunk, it’s a lower tax rate than the income tax rate you’d pay if you held the shares for less than a year.

An 83(b) election does come with risks, though. Because you pay taxes on the shares based on the company’s current valuation, you only see tax advantages if that valuation grows over time. If your company struggles and its value shrinks, your 83(b) election would essentially mean you overpaid in taxes.

And once that money is gone, it’s gone. There’s no reversing your election here. The IRS doesn’t allow the elector to make an overpayment claim on any money paid due to 83(b) elections.

You should also only take this election if you’re confident you’ll stay at your company throughout the vesting period, too. If you elect for an 83(b), you pay taxes on all of the granted shares. If you leave before all of them have vested, you will have paid taxes on shares you’ll never get.

If you think you might want to take this election, act fast. You only have 30 days from your grant date.

Within 30 days of the shares being transferred to you, you need to file a written statement with the IRS.

You used to need to take an additional step, but the IRS did away with it in 2016. Prior to that date, you needed to provide a copy of your 83(b) election with your income tax return in the applicable year. Now, thanks to proposed rulemaking (REG–135524–14) in the Federal Register (137 FR 42439), you can skip that step.

That doesn’t mean you can file the 83(b) and forget about it, though. Tax code still requires you to keep a record of it for as long as it’s relevant, which means you should keep a copy of your election on file for a few years after you sell those shares.

Does an 83(b) election sound like it might be right for you? To learn more about the process and the ramifications or to start your own election, get in touch. Our team of startup tax specialists can make it as easy as possible for you to seize this tax advantage. Contact ShayCPA today.