What do VC’s look for in early-stage founders? 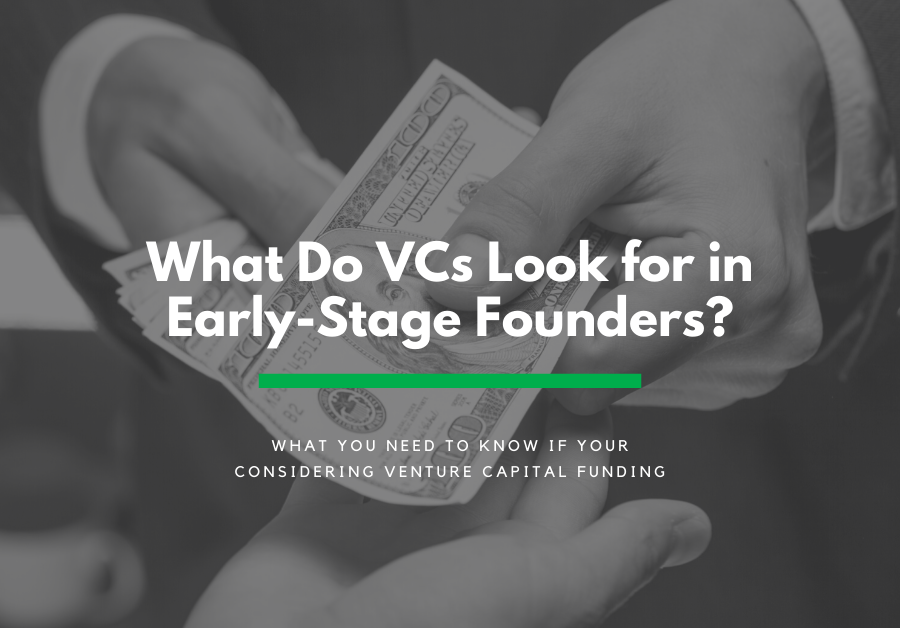 Funding-wise, things generally get easier as your business grows and gains traction. It’s getting the funding you need to finance the early stages of your company that’s the trick. And that’s precisely what prevents a lot of good ideas from becoming viable products.

But it doesn’t have to be a brick wall. Knowing what venture capitals look for in founders during their earliest stages can help you land the partnerships you need to get things off the ground. And, to be frank, most early-stage founders could use all the help they can get. By some estimates, the average VC firm invests in just 10 out of every 1,200 companies they vet.

So how do you beat the odds and win the VC’s approval? Really, it all comes down to showing the VC that you have a commercializable, scalable idea and, just as importantly, that you’ll be easy to work with. Here are a few things that can help VCs see you favorably.

A solid track record for the founding team

This is probably the biggest thing that can work for or against you. VCs get approached so regularly that they’re generally not going to bother getting into an arrangement with a group that hasn’t yet proven themselves.

This means that you should be very clear and very careful about who joins your founding team. For every member you bring on board, you should have two things. First, you should have a distinct role for them that will help the business scale. Secondly, you should make sure they have a resume that shows they will succeed in that role.

Even if your idea was born to you and your buddies, you need to sort out your organizational structure before approaching VCs. Put people in the roles that best align with their credentials. If anyone has a finance background, for example, they would be an ideal candidate for your business’s CFO. And if you can show a solid management background for any of you, make sure you highlight that for the VC.

Ultimately, the individual track records of all the members of your founding team stands in the place of the track record for your untested idea. If you can showcase a history of successes, it’s a huge validator in the eyes of VCs.

Bolstering your track record with outside sources

If the track record of your founding team isn’t overly impressive, it’s time to start making connections. Pinpoint where you have gaps and look for the right people to fill them. If your financial experience is lacking,  adding an experienced advisor to your team can make a big difference.

You don’t necessarily need to land someone on your founding team to make a connection that can help with VCs. These investors are much more likely to at least give your company some serious thought if you can get a recommendation from someone they trust. That referral can speak volumes to a VC because it differentiates you from the dozens of companies that are probably on their radar right now.

Investors have little interest in putting money into a business that’s not going to deliver significant ROI. They want to know that your business can scale, and that it can do so quickly and meaningfully.

You need a way to show VCs that what you’re bringing to the table has the potential to blow up, and the best way to do that is to show evidence of early traction. You can take a two-pronged approach here.

First, you need to show that your product or service is legitimate and that it can function in the desired verticals. Presenting a beta or minimum viable product (the real MVP) gives the VC a way to see that your product has traction insofar as it can figuratively grip the road. Coming to them with something to showcase is a whole lot stronger than coming in with an idea alone.

The second prong of this traction piece delivers a real wow-factor. To truly show that your product has the get-up-and-go to succeed, a user base can go a long way. Even a small community of supporters can speak volumes, especially if they’re willing to provide testimonials or reviews you can show the VC.

The aforementioned MVP shows the VC that you’re off to a good start, as does any user adoption. But those aren’t your only ways to signal success in your early stages. Acceptance into a prestigious accelerator program gives your business one of the best ways to present a compelling case to venture capitalists. As the VC tries to vet you, it literally shows them that you’ve already been vetted — and passed. Some accelerators worth looking into include:

Strategic partnerships can also help you show that your company’s getting off on the right foot, especially if you can partner with well-known brands or ones that you know are well-regarded by the VC.

Some things you can’t necessarily control. But it’s still worth knowing what can make a VC perk up. The aforementioned community of early adopters is one of those unfair advantages that can help an early-stage tech startup stand out, but it’s not necessarily something you can force.

Similarly, a first-mover advantage can set you apart.

If you’re iterating on an existing idea, be prepared to show the VC your distinct, measurable differentiators. Those that forge new ground tend to most excite venture capitalists.

Ultimately, preparing to win over a VC requires a lot of work. The good news is that knowing what they look for in early-stage founders can give you a leg up.

And if you need any help preparing financial reporting to get ready for your pitch, we’re here. Our team at ShayCPA specializes in accounting for tech startups. Contact us today.